Action at a Distance
Christopher Petruccelli

In his first collection of poems, Christopher Petruccelli hits just the right note between the rustic Midwestern lifestyle and the more modern aspects of science. He intertwines these themes with one another to create a sense of cohesion throughout the collection. Action at a Distance takes readers on a cross-country road trip that explores love, science, and Midwestern values. Using a variety of poetic forms, Petruccelli allows readers to experience life through the lines of his poems.

“Tracks in Greene county run through Whitley, and I’ve been meaning to leave this town for years now, but I can’t seem to hold on long enough to climb into cool beds of coal cars.”

Mirna Palacio: How long did this collection take to put together?

Christopher Petrucelli: It depends on where we start. The earliest a poem in this collection was written was in 2010 during my first workshop at the University of Tennessee. The next year, I was taking a class on the history of the chapbook with Dr. Erin Elizabeth Smith and my good friend Luci. We both put collections together and a baby version of “Action at a Distance” was produced. Since then the pieces and the chapbook as a whole have undergone tons of revisions. Now, it’s been picked up by you all at Etchings Press in 2014. In short, the process took four years!

MP: Did you do a lot of research for your writing?

CP: Oh yes, I think everything is research for writing—countless hours crisscrossing the Southeast, Northeast and Midwest by car and Greyhound bus, picking up on local lexicons and histories, reading Hugo’s Triggering Town a thousand times, pouring over articles on mythology and fairy tales, learning the binomial nomenclature for tree species, drinking whisky and smoking cigarettes and quitting drinking and smoking cigarettes. All experiential knowledge, especially that which is not actively perceived as learning/research, works its way into my writing in some manner.

MP: How often do you revise?

CP: I often think it’s a bad habit, but I revise as I’m writing. I’ll make several changes to a line or stanza while I’ve got the next bits floating in my head, but before typing them out, I wrestle with what’s currently in front of me until it feels right.  Often times it means the floating bits wander off, kind of a shame, but that’s how it goes. I also edit the hell out of drafts once they’re “done” being written. I’d say everything goes through at least 10 drafts. It all gets revisited, even pieces that are years old. Editing and revising is a process I don’t think is ever finished and I’m sure there are lots of folks who share that sentiment.

MP: Do you revise your own material, or do you send it out to friends and colleagues?

CP: What I miss most about my undergraduate experience was taking workshop classes and having everyone critique your work. Now that I’m pursuing a non-English degree, I don’t have the same structure for evaluating my material. I’ve got a few friends I try to meet up with to workshop with, but it falls through frequently. Sometimes I’ll email poems to friends and ask them to provide feedback. Lately I’ve resorted to drinking unhealthy amounts of coffee to get weird and wired up and edit my writing.

MP: What was the particular mindset behind this collection?

MP: Some of the poems in your collection have already been published elsewhere. What made you include them in this collection?

CP: Without those pieces included, the framework of the chapbook falls apart. All these poems are linked to one another thematically, and without all of them, the concept of distance and desire breaks down.

MP: What major themes did you hope to touch on in your collection?

CP: These poems are my attempt at communicating the place-making process and trying to find or create idyllic space and the struggles that result from such an experience.

MP: What drew you to poetry? You’re currently studying biogeography, so what’s the connection there?

CP: I poked around my brother Mario’s composition notebook when I was young and thought his writing was boss. I’m not sure if he knows it, but I always felt very encouraged by him to pursue writing. Also all the classic clichés—Dead Poets Society especially, and eighth grade English class—had their impacts. In high school, I thought the romantics and transcendentalists were dope as hell and developed great love for Emerson, Thoreau, Rousseau and Whitman. Then I got to college, took an introduction to poetry class, and read stuff that’s been written in the past fifteen years and my mind was blown by colloquy and a sestina about the McRib. Thinking about the experience and reliving it in my mind gets me jazzed. Also, Buddy Wakefield is one hell of an inspiration. That’s my tripartite muse for poetry—Mario, Nature and McRibs that manifests itself physically as Buddy Wakefield. My lord, what a creature.

As for biogeography, I write what I think I know. The science offers a whole new lexicon and a different way to make sense of the world. Very simply, it’s another well to draw from.

MP: Did biogeography play a large role in your poetry?

CP: Biogeography is definitely present in the poems. It manifests itself in the borrowed language with words like morphology and images of Virginia creepers climbing like smoke. However, even more present is my experience with geography in general. People tend to think of geography as solely states and capitals, but it’s not! This collection is very much a regional geography on the Southeast and Midwest. I’m investigating the relation between place and myself with special attention paid to the relationship with my former partner. All these things are related to landscape and my relationship was always long distance—six years of it—and I felt very connected to the region. For two years, I would drive at least once a month from Greeneville, Tennessee to Corbin, Kentucky. Later I would take Greyhound buses from Knoxville, Tennessee to Columbia, Missouri. I’ve spent a lot of time on back roads and highways and in places people only ever stop to get gas. Action at a Distance is an attempt to make sense of all those things coming together—place making, conceptions of region, relationship woes, etc.

MP: What phrase in the book are you most proud of?

CP: I really dig the last three lines of “Probabilities”:

“Where the sweet tea scent of southern summer

is carried out to the Indiana border and the air

smells a bit more like sugar than usual in June.”

I feel bad tootin’ my own horn, but the repetition in the first line and representation of sweet tea as this indomitable force is really wonderful. I’m also super proud of the Missouri Meerschaum bit in “Expectations of a Greyhound Bus Ride,” and cold blue CSX trains in “Malachite” as well. Regional sensory imagery gets me going.

MP: Why did you choose Action at a Distance as the title?

CP: Pure dumb luck! I was struggling with a title and was on Wikipedia hitting the random article link and I came across “Action at a distance” which according to the wiki page is, “…the concept that an object can be moved, changed, or otherwise affected without being physically touched by another object.” This resonated with me because I was so affected by my relationship and my partner despite her physical absence. Also I was disconnected spatially and regionally. There was no medium or aether in which I felt a part of, and the definition of this physics principle captures these concepts perfectly.

MP: What’s it like to have a chapbook published vs. a poem published in a magazine?

CP: It’s the greatest feeling in the world to have people jibe with your work. The coolest part about having this whole collection published is the storytelling aspect. One poem or a few pieces published together can accomplish that, but I’m stoked about being able to more holistically share the experience I’ve had with the Southeast and Midwest. Also, it’s my own book. How cool is that?

MP: What made you decide to submit to us?

MP: How does it feel to be published via contest rather than a more traditional way?

CP: Getting published is always a wonderful thing, but who doesn’t want to be a winner? Winning a contest is awesome!

MP: How does it feel to be published by a university, particularly by students

CP: Having started writing seriously just a few years ago it feels like quite an accomplishment to have a chapbook come out through a university press. The fact that it is student run is even more rad. “Imaginary Waltz with a Woman Wearing a Dress of Virga” was published in the Rappahannock Review. They’re a fantastic student run journal at the University of Mary Washington in Fredericksburg, Virginia. I also know that Erin Smith, my mentor and spirit animal, is doing incredible things in Knoxville, Tennessee at the university and at Sundress Academy for the Arts. I love seeing the literary world teach not only how to write, but how to publish, adapt to the online world, and market creative endeavors. What the University of Indianapolis is doing is incredible and it’s an honor to have my peers enjoy and publish my work. I don’t know if this makes any sense, but it’s like a man of the people sort of feeling.

MP: Is there anything you’re working on at the moment?

CP: I had some of my “For an Imagined Alice” poems published at Gingerbread House Literary Magazine awhile back and newer ones of those are trying to wriggle out of my brain. My hope is to continue developing the Alice pieces while examining similar themes of distance and desire, geography and place making. 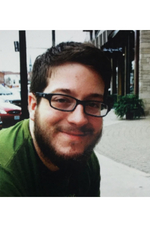 Chris Petruccelli is a 2012 graduate of the University of Tennessee. He currently studies biogeography at the University of Missouri and is an associate poetry editor at Stirring. His work has appeared in Josephine Quarterly, Connotation Press, Gingerbread House Literary Magazine, Rappahannock Review and Blast Furnace. In his free time, Chris chases after things that are bigger on the inside.