In the Herald of Improbable Misfortunes
Robert Campbell

An enchanting poetry collection about dreams, dreamers, and otherworldly happenings, In the Herald of Improbable Misfortunes will captivate you through ornate imagery. Campbell brings animals and inanimate objects to life in this enchanting read.

In this book, “Dreams are not merely our pretty/theater of elsewhere—there’s/a wildness unsanctioned.” Robert Campbell, dear reader, is here to lead you through that wilderness, where everything—the deer, the grass, and even the factory—is dreaming. With a sharp wit and a sly irreverence, these are poems that reach through the dream, toward an uncertain awakening.

Matthew Olzmann, author of Contradictions in the Design and Mezzanines

In the title poem of Robert Campbell’s fine chapbook, the speaker announces: “This/is our duty, to inform you of developments/and departures, of every last unhappening.” Throughout In the Herald of Improbable Misfortunes, mystery—conundrum, enigma, dreamlike revelation—is given a voice and a vision through extraordinary messengers such as deer, opossums, angels with their “barbed artilleries of red.” Each image, line, and stanza combine to create secular testaments, both Old and New in their revelations. These poems herald the worldview and the arrival of a very fine poet.

In the Herald of Improbable Misfortunes is intimate and strange, cutting and tender. When I read Robert Campbell’s collection, I want to share the lines with everyone in earshot. These poems, “animal” and “true,” they “trouble,” they “heartache,” they make you want to “fall upon the rocks and sing.”

Blas Falconer, author of The Foundling Wheel and A Question of Gravity and Light

Rochelle Bauer: How long have you been writing?

Robert Campbell: I remember writing poems in third grade. No joke. But honestly, I’ve been writing in what you would call a “serious” way since the tail end of my college years. Writing with the intention of having an actual reader, I mean, and not just for cathartic or educational reasons.

RB: What inspires you the most?

RC: That’s a hard question. I try not to rely on inspiration, of course, since writers have to write regardless of whether we feel “inspired” or not. That said, I keep going back to the absurd or the fantastical. I’m not sure what it is. Maybe it’s because, for all our commonalities, we all experience the world in totally unique ways through the lens of our own little dreams. I think there’s something really beautiful and sad about that.

RB: I know it’s hard to pick a favorite from your own poems (from the book), but do you have a particular one you’re proud of? Why?

RC: Writing “Dream in Which My Body Is a Knife” was an interesting process. The early draft was a kind of prose poem, but I’m just very fond of the pacing and breathing space that comes with lineated poems, and the density of prose poems kind of terrifies me for some reason. Then it became a very long-lined poem, completely end-stopped. I actually still like that version, but it reads with this odd severity that is almost too dramatic. Also, at one point, it was much, much longer, and much more referential toward Emily Dickinson’s “My Life Had Stood—a Loaded Gun,” which is one of my favorite poems, much better than any poem I’ve ever written for sure. I think I revised that poem pretty regularly for over a year before I was actually happy with it. I remember a Word document with five or six different versions at one point.

RB: Do you have any advice for younger writers?

RC: I feel like anything I would tell a younger writer in terms of traditional advice would be based on the kind of writer I wanted to be when I was younger, but those things can and should change. Instead, maybe just decide what kind of writer you want to be and identify the wise voices that speak to you and can guide you properly, then follow them. It’s inevitable that you have to read and write a whole hell of a lot to figure that out, but everyone knows that. Hell, I still have so much to learn.

Also, don’t get too hung up on the idea of “being a writer.” The idea of “the writer” as a singular, monolithic identity gets needlessly complicated and is a really strange paradigm to unpack. Just be the kind of writer you need to be. That’s enough.

RB: What does being published by our Etchings Press class mean to you?

RC: It’s wonderful. I mean that not only as a writer being able to share a collection of poems with the world, but in the sense that this press is a learning opportunity for students as well.

How amazing is it that students gain experience in the process of running a small literary press? I’m thrilled to be a part of the Etchings Press legacy. It’s just a very cool thing in every way. 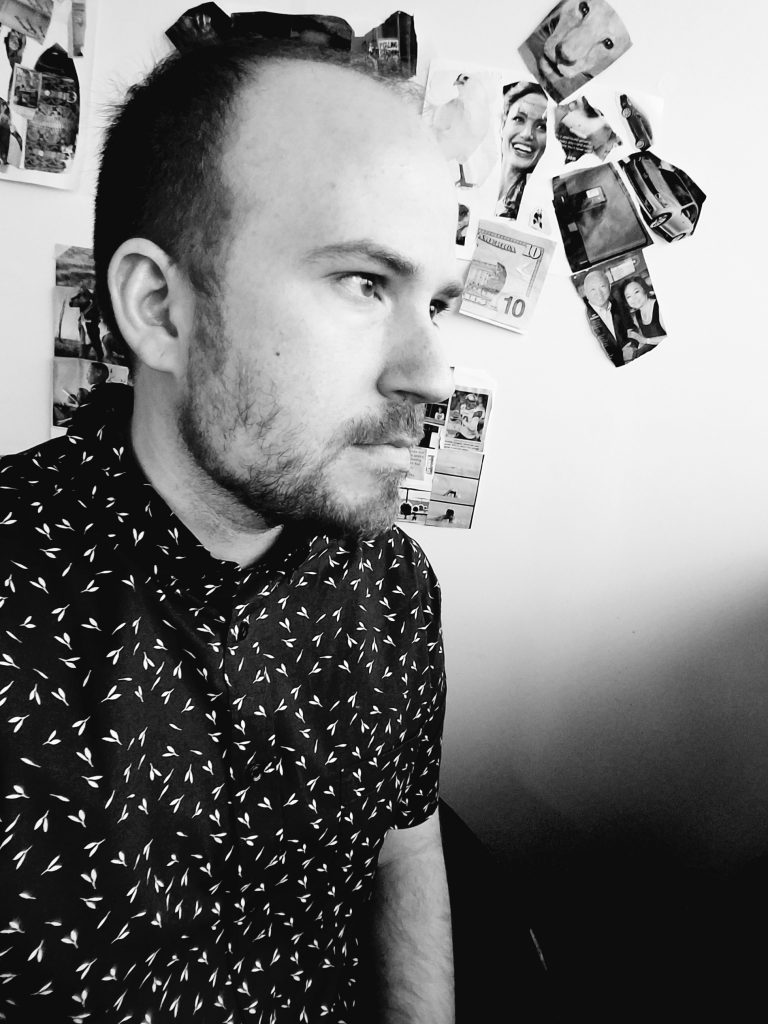 Robert Campbell’s poetry and criticism have appeared in Tupelo Quarterly, The Collagist, Columbia Poetry Review, River Styx, Ninth Letter, Asheville Poetry Review, Tinderbox Poetry Journal, Sundog Lit, Zone 3, The Adroit Journal, and many other journals. Twice nominated for the Pushcart Prize, short-listed for the 2015 Black Warrior Review Poetry Contest, third place winner of the 2013 River Styx International Poetry Contest, and previous winner of the Flo Gault Poetry Prize through Sarabande Books, Robert holds an MFA in Poetry from Murray State University and an MS in Library Science from the University of Kentucky. He lives with his partner and animals on a winding country road in the bluegrass region of Kentucky. Learn more about Robert Campbell on his website.

About the 2018 Novella Production Team

Etchings Press is UIndy’s teaching press and publishing laboratory. Our students engage with writers from across the country. In the Chapbook and Novella Contest each spring, students read and judge submissions and then edit and publish winning chapbooks and a novella, like In the Herald of Improbable Misfortunes by Robert Campbell. 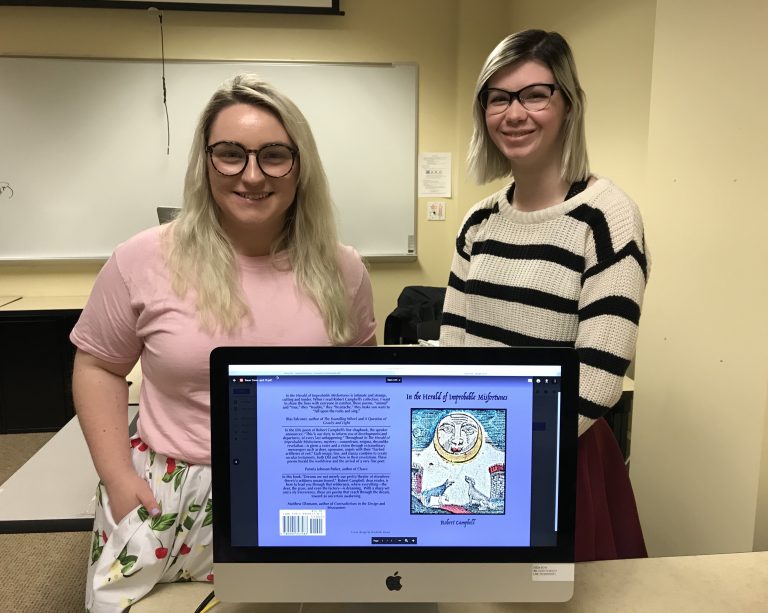 Rochelle Bauer is currently a junior at the University of Indianapolis majoring in Actuarial Science, minoring in Mathematics. She is a member of the Strain Honors College and has managed to finagle the creation of her own poetry chapbook as her Honors Project. With this class, she’s now had the opportunity to see the publishing and editing side of lovely little masterpieces. She’ll still go on to write poetry after college, but preferably and eventually within the walls of fancy-shcmancy six-million dollar waterfront property, sitting atop a stack of her published works.

Savannah Harris is currently a freshmen at University of Indianapolis majoring in English-creative writing.