Ologies is Chelsea Biondolillo’s debut chapbook of essays about her relationship as a woman with an interest in science. These memoir-style essays with gruesome imagery form a compelling narrative of Biondolillo’s adolescence. Through these descriptions, Biondolillo claims that women can be scientists in a male-dominated, sexist field of study.

“There was never any indication, outside of the cluttered confines of my desk top, that a girl could be a scientist. Or that my interests were even scientific. There was no proof that discovery could be a graceful, shining thing.”

Etchings Press: All of your essays have previously been published in different literary magazines and journals – was this always intended to be a collection or did they come together organically?

Chelsea Biondolillo: These pieces are all part of a larger manuscript, Careers in Science: A Handbook for Girls and Women. This book started out as my Master’s thesis, but since graduation, several works have been added, including three of the four essays in Ologies. Which isn’t exactly to say that they didn’t come together organically. I’ve been experimenting for awhile with ways to craft a memoir using hybrid/lyric forms while also exploring the idea of a life built from small and not-so-small losses. This selection of essays created a nice arc, to my mind, with echoes of loneliness assuaged by the natural world.

EP: What attracts you to writing creative nonfiction as opposed to fiction or poetry?

CB: Nonfiction has the capacity to build windows between lived lives. While fiction can tell universal stories, nonfiction’s strength is in the attempt to make a singular story powerful. As far as poetry goes, I am not at all opposed to it. I just prefer to write my poetry in paragraphs and then sometimes string those paragraphs together.

EP: How much research did you have to do for this collection?

CB: There is a lot of research in “Phrenology” and “Pyrology.” The Fanny Burney and Mark Twain pieces that are heavily excerpted were works that resonated with me the first time I read each of them, years ago. I was drawn to the witness aspect in each writers’ work, and especially Twain’s metaphors, employed to describe lava flow to mainlanders who might never in their lives see it and Burney’s evocative descriptions of the sensations she felt during her mastectomy. The Phrenology footnotes were collected, over several months of research, into a failed essay. I learned to prepare song bird skins while I was a graduate student. My university has a vertebrate collection on site and they relied on volunteers to prepare several years of backlogged (and often freezer-burned) specimens.

EP: Do you approach each essay in a similar fashion or does each essay have it’s own creative process?

CB: I tend to start out with an approximate word count in mind, but that’s usually it. I’m always writing myself short notes, in the margins of handouts, on my phone’s notepad, in a series of poorly titled word documents that I keep in a messy file on my desktop. These short notes often become lines in essays. Sometimes they are foundation lines, sometimes they become a flash essay all on their own. Some pieces, like “Phrenology,” have a very physical process–I printed that one out over and over, cut up all of the sections and moved them around on my studio floor until I liked the way they flowed. Others, like “Necrology,” are just a matter of playing with the words on a screen.

EP: What was the most difficult essay in this collection to write? And why?

CB: “Phrenology” was the one with the most drafts, which represents a kind of difficulty. It went from second person to third to first. I tried all kinds of crazy page layouts before settling on the floating boxes. And then the order of the anecdotes took several iterations to build a series of echoing images.

But “Genealogy” was the first essay I wrote after all of my MFA workshops were over. In some respects it was harder, because it was the first one I had to do without any input from my (amazing) cohort. I read the final draft out loud four or five times, tweaking words and changing the way the segments were visually separated on the page, trying to get my brain to agree with my gut that it really was done.

EP: Why did you pick the –ologies you did and not something more commonly known like zoology?

CB: Part of what draws me to the natural world and the sciences that seek to better understand it are hints of phenomena that I see or hear or read and which I want to investigate further. Why does the Monarch chrysalis get sort of transparent right at the very end? Why are the edges of obsidian so different from the edges of quartz? Where do migrating birds sleep at night? These unknowns are what inspire me to do field or library research. When I’m reading, if I come across a word I don’t know, I like to look those up, too. I chose the ologies I did to inspire that same sort of behavior in readers not already familiar with them.

EP: Why did you decide to include the offset text?

CB: In Fanny’s letter to her sister, from which the offset text in “Phrenology” is taken, she describes something horrible, which nonetheless saved her life. While Twain uses colorful (but for his time, well-known) train track and river boat metaphors to attempt to “draw” an exotic picture of a natural wonder few of his readers could see. I’m using these texts as “expert” evidence to the power of witness, to the power of a single voice, and to the (sometimes terrible, sometimes wonderful) power of immediate, physical experience.

EP: Did the offset text mean to flow like a narrative or did it happen to work out like that?

CB: The texts are excerpted from the source material in order–though much is missing, I wanted to maintain the spirit of the original narratives in each piece.

EP: Why did you choose to include the footnotes in your essays?

CB: A.) They mimic the way I talk. I am always interrupting myself with tangential information, side notes, and fun facts to know and tell. It can be excruciating to hear it play out in person.

B.) In Phrenology and Pyrology, I wanted to underscore the constructed nature of the essays by presenting them as physically collaged on the page. By offsetting borrowed text in floating boxes, and speaking about the body text via my own and others’ voices in footnotes, I force the reader to prioritize the different voices by choosing the order in which the disparate parts will be read.

EP: What is your personal favorite essay from the collection?

CB: All four of these essays feel like heavily designed objects, in addition to being pieces of written text. I’m happiest with the look of “Pyrology” on the page, but I still enjoy reading “Genealogy” out loud, even after having done so multiple times in front of my mirror and at readings. 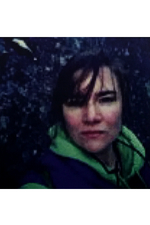 Chelsea Biondolillo’s prose has appeared in Sonora Review, Sweet Lit, Brevity, Passages North, Shenandoah, River Teeth, Hayden’s Ferry Review, and others. In 2014, she was awarded Shenandoah’s Carter Prize for the Essay. She has an MFA from the University of Wyoming and is the 2014-15 Olive B. O’Connor nonfiction fellow at Colgate University in Central New York State.