First- and second-hand embarrassment are alive and well for the individuals in this vibrant, new collection of essays. The raw and relatable stories in Pathetic give readers a chance to examine the social interactions between humans and determine where to draw the line between self-censoring and free expression. Some of the stories in this collection evoke feelings of pity for the essayist, but others for the people with whom she must interact. Between the pages of this collection lurk stories of bad mentors, bad thieves, and multiple bad decisions. Shannon McLeod’s debut collection, Pathetic, gives readers the opportunity to delve into the life of someone who has made many mistakes but has had the chance to learn and grow from them.

“I’m sure the reason they chanted was because my dancing was so absurd. And shameless. I want to feel that way again, shamelessly absurd.”

Etchings Press: What was one of the most surprising things you learned in creating your book?

Shannon McLeod: When I was gathering my nonfiction pieces together I realized that I used the word “pathetic” in almost half of my personal essays. Aside from discovering a label I didn’t realized was so heavily ingrained in my mind, it helped me to see a thread between some of the essays. This guided my choices in which essays to keep and which to toss. And, of course, I learned that I need to consult a thesaurus (or a therapist) more regularly. There are still a few uses of “pathetic” in there, but I made some word choice edits before submitting. I think it’s down to one or two in the final collection if you don’t count the title.

EP: Being a writer, I know first hand that certain sentences or paragraphs you are really attached to just don’t belong. How do you go about reasoning with yourself on letting it go?

SM: One essay in the collection “Bad Mentor” is a piece that I’ve been working on for a while. I wanted to make it a much more extensive essay, including friends’ stories of mentors who discouraged them from certain career paths. But I couldn’t make that vision fully come together, so I ended up simplifying and cutting it down by about 70%. “Bad Mentor” is a piece that might not work so well standing alone, but I think it is greatly improved by appearing within the context of a collection (I hope). I’m still interested in how encounters with people that we like or dislike direct our professional pursuits, so I will probably write more about that in the future. Knowing you can salvage abandoned ideas later can be reassuring. Having a document dedicated to discarded bits of writing helps me cut unnecessary parts, too. If I know I can revisit it, and perhaps recycle it, that’s a comfort. I don’t think I’ve ever ended up using anything from the rejected writing bits, so I guess it’s just a psychological trick. It’s like literary hoarding.

EP: What do you do when you need a break from writing?

SM: I watch a lot of reality television, to be honest. I also read a lot. I don’t often feel like I need a “break” from writing. I definitely need breaks from certain pieces, but I’m almost always game for working on a new project if I’ve hit a roadblock on an old one. I think I’d feel completely frustrated and paralyzed if I were only allowed to work on one idea at a time.

EP: How do you deal with the vulnerability of knowing that the pieces that you worked so long on can be rejected?

SM: Oh man, that’s hard. Maybe this is deluded, but I try to remember how much luck has to do with having writing accepted for publication. I remind myself that a lot of it depends upon the tastes (and moods, and patience, etc.) of the particular editor who reads your writing. It’s so subjective. So if you can say, “I guess I wasn’t so lucky this time,” instead of saying “They rejected me because I’m a failure and this writing is a piece of shit,” that can save you from becoming utterly discouraged. I try to let luck take some of the heat. It’s at least partially responsible. My first piece that was ever accepted for publication was an essay I had submitted to the same publication under a different title the year before. I don’t know what possessed me to send the piece to the same publication AGAIN, but the second time I submitted it, the essay was accepted. Different editor, different results.

EP: Do you have a specific writing style?

SM: I think it’s hard to pinpoint your own style, and if you’re going for a certain style, it can often come out sounding contrived. Someone else might describe my style a certain way, but I’m not at the point where I feel I can describe it myself. But, then again, maybe I’m just not intellectual or analytical enough for that.

EP: When did you first realize that you wanted to be a writer?

SM: When I took a class with Laura Kasischke during my last semester of undergrad. She is an amazing writer and such an encouraging person. At the end of the semester, she said she could see me writing a novel one day, and it felt like that gave me permission to try to write a novel. I don’t think I would have had the confidence to dedicate so much of my time to writing if it hadn’t been for Laura’s encouragement.

EP: How do you balance your writing life with your work life?

SM: I use writing as an escape from my working life, so it feels like those worlds balance each other out. I read an interview with Louise Glück where she said something like she could never write as well or as much when she didn’t have a job to offer a distraction or inspire ideas. I suspect I’m the same way. I enjoy writing more ​because​ it is not my day job, I think. As far as time constraints, I do get a lot of my writing done on the weekends.

EP: Do you get embarrassed when your students read your writing?

SM: To avoid potential humiliation, I publish under my maiden name, while my students know me by my married name. Being a novice teacher provides plenty of humiliation on its own. I don’t need any extra doses of embarrassment. I’ve shared my writing with students a few times when I wrote along with them, in response to in­-class prompts, for example. But I’ve never announced my publications or anything. I’m sure students could find my writing online with enough internet sleuthing, but I don’t want to put it out there for all to see. Teachers are under enough scrutiny these days. You have to be careful what you’re putting out there, especially as a K­12 teacher.

EP: Did you ever get the hang of tap dancing?

SM: Ha. One of my first thoughts upon learning Etchings Press would be publishing this chapbook was, “I guess I’m gonna have to follow through with that tap dancing thing.” I’ve mainly been learning from YouTube videos, but I hope to take some classes over the summer.

EP: I saw that you liked to read, is there a specific genre?

SM: I usually like literary fiction, memoirs, humor, stuff about cults and other hyper­insulated communities.

EP: What is the best quote you ever saw in a book?

SM: I looked for quotes I’ve marked in my favorite books, but taking them out of context kind of kills them. So here’s a little poem I like by Dorothy Parker [titled Oscar Wilde]: “If, with the literate, I am Impelled to write an epigram, I never seek to take the credit; We all assume that Oscar said it.”

EP: How long would you say that it took you to work on the entire collection as a whole?

SM: That’s difficult to estimate. I wrote these essays at different times over the past few years. I worked on putting together the collection, ordering, and editing for about a month. Some of the essays were revised dramatically once I began picturing them within the context of a chapbook.

EP: Which of the pieces in the collection did you write first? Did you set out to write several pieces for a collection or did the collection just come naturally from the writing that you had produced?

SM: I actually think I wrote the first essay of the collection, “Six Years Ago,” first, though I didn’t order them chronologically. I wanted the collection to begin and end with pieces that felt more distant. The most recent essay I wrote was “Learning to Tap Dance in Adulthood,” which I began writing last December. I didn’t write these with the intention of a collection. I just recently thought, “Hey, I think I have enough essays for a collection now.” Once I found the thematic thread, I was able to figure out which pieces to leave out of the chapbook.

EP: Besides nonfiction pieces, are you interested in working on other types of writing?

SM: I also write short stories and novels. I just started experimenting with playwriting, and a short play I wrote will be performed in a one act play festival at the end of May.

EP: What type of writing are you working on right now? Are you interested in creating another chapbook?

SM: I’m trying to polish a novel I’ve been working on for the past five years. I’m also close to finished with the first draft of a second novel. I have several short stories and essays I’m working on as well. I always like to have several projects going at once. I imagine that is sometimes to the detriment of my own work, but I get bored easily. I would love to write another chapbook. I’ve been writing short stories about various female characters in odd workplace conflicts over the last couple years. I could see those becoming a chapbook someday.

EP: What is your advice for young writers who are still trying to find their voice?

SM: Write lots of letters and emails to friends! Read over your writing to loved ones and notice what sounds most like you. Then try to get into that mindset when you’re working on creative writing. My cousin and I began a tradition of writing letters to one another when we were little, and I think that casual writing on a regular basis helped develop my voice. 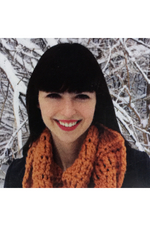 Shannon McLeod teaches high shool English in southeast Michigan. Her writing has previously appeared in Hobart, Gawker, The Billfold, Cheap Pop, and Word Riot, among other publications. You can find her on shannon-mcleod.com.