Frederick Pelzer opens his debut collection of short fiction entitled Static: Stories with a short conversation between three people in a bar and the narrator’s reflection on his own life following this conversation. The other pieces of flash fiction reflect a similar realistic tone throughout the book, with Pelzer’s snippets reflecting the quiet, often overlooked moments in life. Pelzer’s descriptive style allows the reader to picture each moment described in each short piece with ease, and the clarity the characters discover in small, seemingly insignificant moments in life gives a sense that every moment is important in its own way.

Pelzer’s short, staccato style is perfect for the length of the pieces within this compilation, and though not strictly related to one another, each essay shares a definitive tone with the collection as a whole. Pelzer’s collection is an interesting take on the seemingly meaningless background moments in our lives that aren’t actually so meaningless after all, and this collection serves as a great reminder that the small moments count, too. Static: Stories reminds us that life is ultimately made up of more small moments than large ones, so it doesn’t hurt to reflect on them every once in a while. A few may even be large moments after all.

“At night I like to sit with the ghost on the back porch while I smoke.”

Etchings Press: What inspired you to become a writer?

Frederick Pelzer: I was raised in a house that loved stories so a big part of it was simply by osmosis. But the turning point came in the fourth grade. My teacher, Jeff Fluharty, had just published a children’s book, I Can’t Talk Right Now I’m Busy Writing Nothing, and he had us write a short story every month. It was both my first taste of writing and of knowing someone who was a writer. That sense of “Oh you can be this, you can be a writer.” Ever since it’s what I’ve wanted to do.

EP: Are there any inspirations behind any of the stories in Static: Stories?

FP:  Most of these I wrote a few years ago, around the time I graduated and changed cities and ultimately broke up with my college girlfriend, and in a lot of my writing at the time I was very obsessed with what makes a relationship work, and more importantly, what doesn’t. There’s a lot of self-doubt getting worked through on the page, and I’m just glad it reads as a story and not a self-help session.

EP: Is there an overall theme that you wish the readers to get out of your collection of stories?

FP:  I definitely find it a meditation on relationships, why they happen, why they fail, why we stick around. But I’m also pretty biased by my own biography. As long as the reader gets something from it for herself I’m happy.

EP: Did you study writing in college or is writing a hobby on the side?

FP:  I did study writing in college, perhaps foolishly, though I also majored in theater arts so certainly I had plenty of optimism to go around. In truth, I grew ten-fold as a writer by having teachers to break my bad habits and kick my snotty ass. I look back on the writer I was, so convinced I knew best because I was telling some truths, man, and I just want to shake myself and apologize to my teachers. It was through those classes that I first really learned the discipline of writing, of making the effort to write every day and then to review what you’ve written with as honest an eye as you can manage. So consider this chapbook my apology to all my professors for sometimes being an insufferable ass.

EP: Can you see yourself making a career out of writing?

FP: It’s tough out there. When I first decided on creative writing as a major, my thought was to go on to an MFA Program, and then start teaching while writing in my free time. Clearly I was naïve about the reality of modern higher learning economics. Plus no MFA program would have me, and rightfully so, as my writing submissions could best be described as sophomoric. So as much as I’d love to be able to write full time, for now I’m keeping the day job and filling my spare time with this obsession of mine.

EP: What was the hardest and/or easiest story in this collection to write?

FP: “You Need to Stop Texting Me” was the easiest as I remember. It was one of those stories where you wake up with this phrase or idea and the whole thing is just waiting there and you write it down right that moment because otherwise you’ll lose it. It’s such a rare joy to have that happen. Someone texts “I want to eat your heart” as a romantic thing, what happens next? That’s the whole story. It probably originated in some misguided romantic notion of my own.

The story that went through the most changes and the longest development period would absolutely be the title story “Static.” Stylistically I knew I wanted to push myself but that resulted in some messy abandoned drafts along the way. Right up until I submitted the collection I was still reworking it and changing titles. I think it passed through every workshop group I’ve been a part of and any success I have with it owes a lot to the great feedback I’ve received.

I also had qualms about “Wolf” and the use of the word tranny. Clearly it’s an offensive term. At the same time, it made sense for this ex-con to use, and helps to contribute to the narrator and his girlfriend’s sense of superiority. Ultimately I think Carol is the one character most at peace with herself and who she is, setting up the narrator’s envy at the end, and so it doesn’t matter what these people call her because she has found a life that she can call her own.

EP: Do you have any weird quirks when it comes to writing (a time of day, music has to be playing, etc)?

FP: I am pretty obsessive about music. I’m always listening to it when I’m writing, and if I’m working on a larger project like a novel I’ll create playlists that are hundreds of tracks long and constantly curate them to achieve the right mood. Maybe not the best use of my time but at this point it’s nearing a compulsion. Otherwise I just try to write as much as I can – first thing when I wake up, the commute to and from work, on my lunch break, after dinner, whenever I can steal a minute or two.

FP: As I said, I wrote most of these stories a few years ago. Some had been published but I’d mostly turned my attention to finishing an overwrought novel of the “keg-stand romance” genre that so many college writers dip into and I have since buried in my hard drive. Returning to these stories to put together my submission, it surprised me how they seemed to make one cohesive statement. Reading them again is like picking up a snapshot of a time and point-of-view in my life that I was passing through.

EP: What writer or writers have had the greatest influence on you?

FP:  Michael Chabon, hands down. I read his first book, Mysteries of Pittsburgh, while I was a freshman at the University of Pittsburgh, and having him describe a place and a feeling that close to my own life opened me up to everything that fiction can accomplish. I’ve consumed everything by him and love his use of language and the sense of wonder he brings to all that he writes.

EP: How did you hear about the Etchings Press Chapbook Contest?

FP: I heard about the contest from Sal Pane, a professor at the University of Indianapolis whom I know through mutual friends in Pittsburgh and had published me as part of his Kanye West anthology #GOODLitSwerveAutumn. He was promoting the contest everywhere he could and I finally gave in and submitted these stories.

FP:  In terms of the actual process, the biggest change is I get to write a dedication and acknowledgments section, which in turn means I get to worry if I missed anyone. Otherwise I just try to stay out of the way of the mechanics of publishing the actual magazine or chapbook and answer questions as quickly as I can.

EP: What is it like to have your first book published?

FP: I still don’t quite believe that I’ll get to hold a book made of words written by me, though I certainly now appreciate the idea of physical books as a fetishistic item.

EP: Any plans for future books or stories?

FP: I try to always have something going. Right now I’m working on a novella, Imperial Beach, about a would-be detective who’s also a washed up Comic-Con goer, and a novel called Strange Days about Chicago and the comedy community here and terrorists. I’m also showrunning the webseries Losers, which we just finished casting, and we’ll be shooting that all throughout the summer. 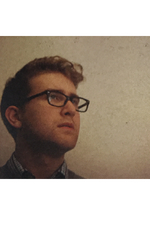 A graduate of the University of Pittsburgh, Frederick Pelzer lives in Chicago, where he is a founding member of Cloud Gate Productions. This is his first book.